Silverthorne recycles asphalt to save money and the environment

SILVERTHORNE, CO - Street maintenance jobs are messy affairs, and you wouldn't think there's a whole lot you can do with old asphalt once it's been ripped up. But the Town of Silverthorne, the county road and bridge department and Cutler Repaving of Lawrence, Kan., have found a way to save some money and resources by recycling the asphalt and using it in repaving work.

Cutler's process, known as "hot-in-place recycling" in technical terms, was most recently used in the Silverthorne repaving project on Annie Road west of Blue River Parkway. The first step is to heat the existing pavement with a burner mounted underneath a truck. This makes the pavement easier to work with.

"You basically bring it back to life to when it came out of the plant five or 10 years ago," said Lyle Smith, who runs Cutler's Utah and Colorado regional office. "You can't scarify something that's cold."

"Scarifying" is the next step, which is when the pavement is ripped up and loosened by some rather nasty-looking metal teeth that follow behind the preheater. Smith said the pavement is typically scarified to a depth of about 1 inch, meaning 1 inch of road surface is removed and recycled. A rejuvenating agent is then applied to the loose pavement, which makes it stickier and easier to reapply. The machine then gathers up the material, recycles it and lays it back down on the surface. A layer of fresh asphalt is then laid down over the recycled material while the old layer is still hot.

"They're both hot, and they meld together real well," Smith said. He said this hot bonding process was better than other repaving methods and created a quality surface for cars to drive on. 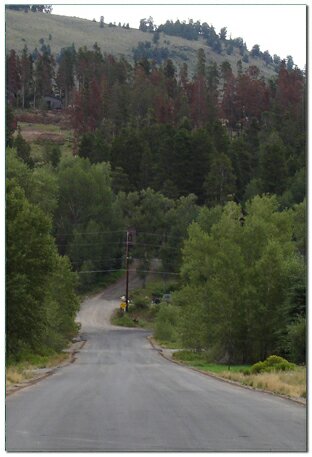 Bowles agreed with Smith, saying he hasn't heard of any problems with any of the jobs Cutler has done in their five years working in Summit County.

"So far the quality's been outstanding," he said.

Bowles and the director of the county road and bridge department, John Polhemus, both said recycling asphalt saves money compared to using all new material, especially once removal and disposal costs were figured in.

"It's a little cheaper than a 2-inch overlay," Polhemus said. "We're getting more roads done for the price."

Bowles was a little more generous, saying the recent Silverthorne job cost about $500,000 which was half of the estimate for a reconstruction project that would have used all new asphalt.

Pohlemus and Bowles also said recycling asphalt is better for the environment because it uses less energy. The materials for making asphalt are a non-renewable resource, and they said the recycling process uses less equipment and takes less time than a traditional repaving job. Smith offered a slightly different take.

Smith said Colorado and New Mexico are the two biggest recyclers of asphalt in the country, though he wouldn't elaborate on why that might be. Regardless, he said he's looking forward to working in Summit County in the future.

"We've been working there for five years, everybody loves us," he said. "It's a good area to work in."